Ex-Ray: Finding Browser Extensions That Spy on Your Browsing Habits

In this post we introduce Ex-Ray, our recently developed system. We use it to detect browser extensions which leak browsing history, regardless of their leakage channel. After analyzing Chrome extensions with more than 1,000 installations (10,691 total) we flagged 212 as leaking. We also found two extensions with large installation base that leak the users' history by means that were undetectable to prior work.

Our paper "Ex-Ray: Detection of History-Leaking Browser Extensions" is available for download here: pdf and bib. This project was a collaboration between Northeastern University and University College London. We will present the work at ACSAC this December.

The browser has become the primary interface for interactions with the Internet, from writing emails, to listening to music, to online banking. The shift of applications from the desktop to the Web has made the browser the de-facto operating system. Browser extensions can "extend" the core functionality of the browser, across all online activities of a user. They sometimes pave the way towards features which later become integrated into browsers themselves, such as password managers.

However, the access to powerful APIs given to extensions also allows for undesired side effects, such as invasion of privacy. This project is partially motivated by our previous analysis into the SimilarWeb browsing history data collection. We found 42 extensions that reported all of users' browsing history to a third party, often without it being required by the advertised functionality or disclosed in the terms of service.

This motivated us to investigate further and develop a more general detection system for privacy leaks in browser extensions. We wanted an approach that captures fundamental invariants of tracking browsing behavior that would be robust against obfuscation or encryption. Ex-Ray operates with two complementary systems in supervised and unsupervised fashion, and a triage system that would ease manual verification. We flagged 212 as history-leaking and discovered extensions that were leaking in ways that were out of scope for prior work. One extension was using strong encryption on tracking beacons before transfer, and the other one was using WebSockets. As our system works independently of the way of leaking, we were able to flag both.

To gain insight into the environment in which trackers operate, and how data might be used, we configured a honeypot. We exercised extensions in a container and browsed by serving sites locally. Both Web and DNS were configured to work without interacting with the public Internet, except if extensions purposefully did so. We also operated a webserver with the same address on the public Internet that would collect incoming requests. As we encoded the extension ID into the URLs we visited, we were able to link incoming requests to extensions that have leaked them. After excluding VPN and proxy extensions, we found 38 extensions that would connect back to our honeypot. The confirmation that trackers are acting on leaked data motivated further steps in this work. We used these extensions as part of our ground truth for further experiments.

Here we compare extension execution to incoming request over time. We noticed that leaked history is often used immediately after it leaks to crawl the sites. These connections confirm that leaked browsing history is used by the receivers and is not leaked purely coincidentally. However, we identified no malicious behavior in our log files, such as vulnerability scans.

Other than the behavior over time, another aspect is possible collaboration between extension authors. In our honeypot probe we observed hosts that connected to multiple URLs unique to extensions, and conversely URLs that received connections from multiple hosts. These relations are possible indicators for a form of data sharing or shared infrastructure between trackers. Each line in this table consists of such a connected group.

Our system has three main components.

In this post we will focus on the unsupervised learning component, for the other components we refer to the paper. 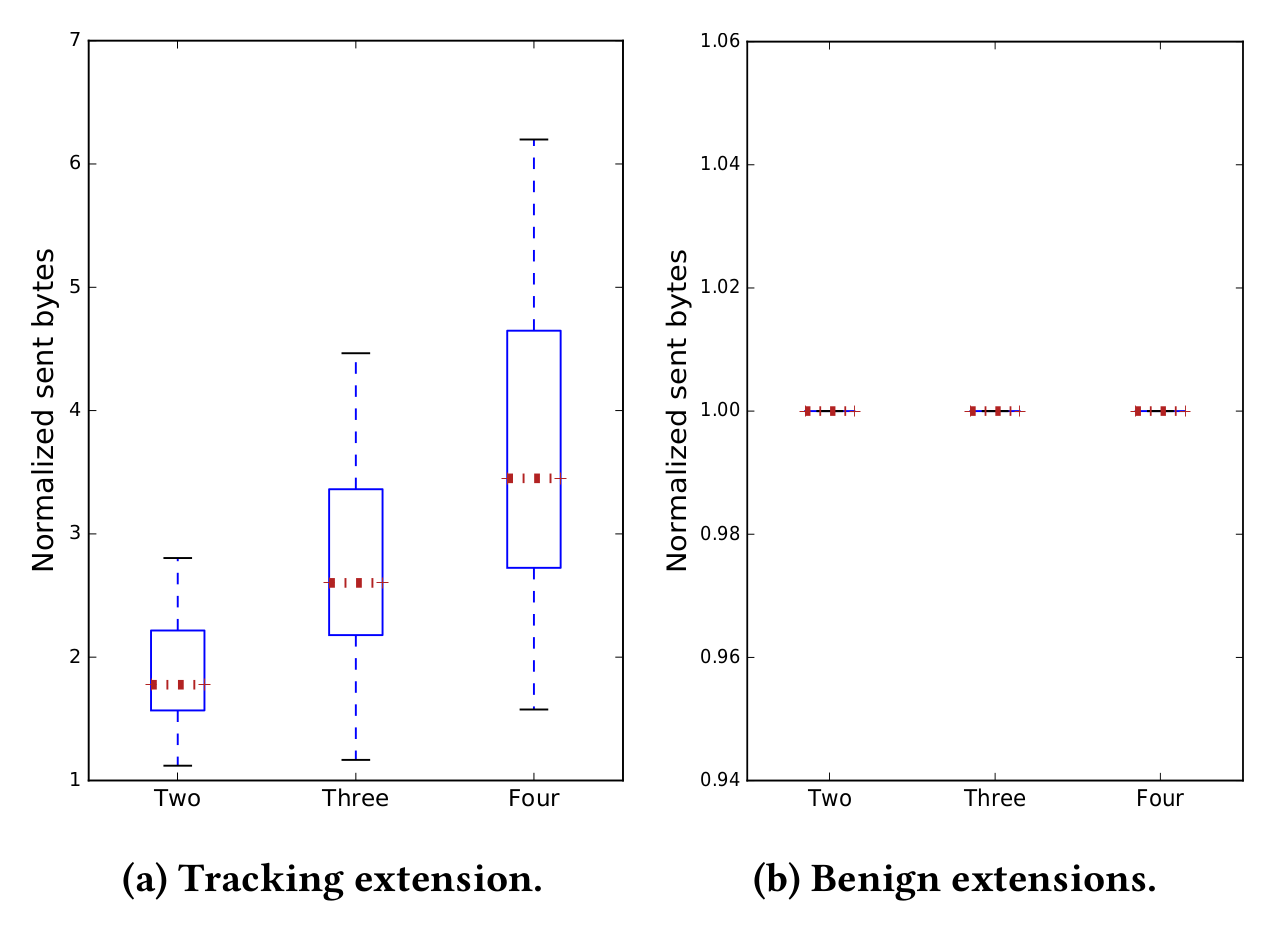 Comparison of sent traffic over several execution stages with increasing amount of history. On the Left we see history-leaking extensions, and on the right benign ones. Data that is sent out by extensions varies little for benign extensions, but for trackers it will vary depending on the amount of history supplied.

To identify privacy-violating extensions, we exercise them in multiple stages, changing the amount of private data supplied to the browser, and in turn to the extension under test. Based on the type of extension, the traffic usage can change depending on the number of visited sites. However, the underlying assumption is that benign extension traffic should not be influenced by the size of the browsing history.

Based on this insight, We use linear regression on each set of flows to estimate the optimal set of parameters that support the identification of history-leaking extensions. We aim to establish a causality relation between two variables: (i) the amount of raw data sent through the network and (ii) the amount of history leaked to a given domain. For this, we rely on the counterfactual analysis model. We use the size of history we provide to an extension as input variable to a controlled environment. Next, we observe outgoing traffic as an output variable for our classification. We also use other indicators such as lower bound of compressed history as cut-off value. The details of our detection engine are described in detail in the full paper (see links at top and bottom of post). 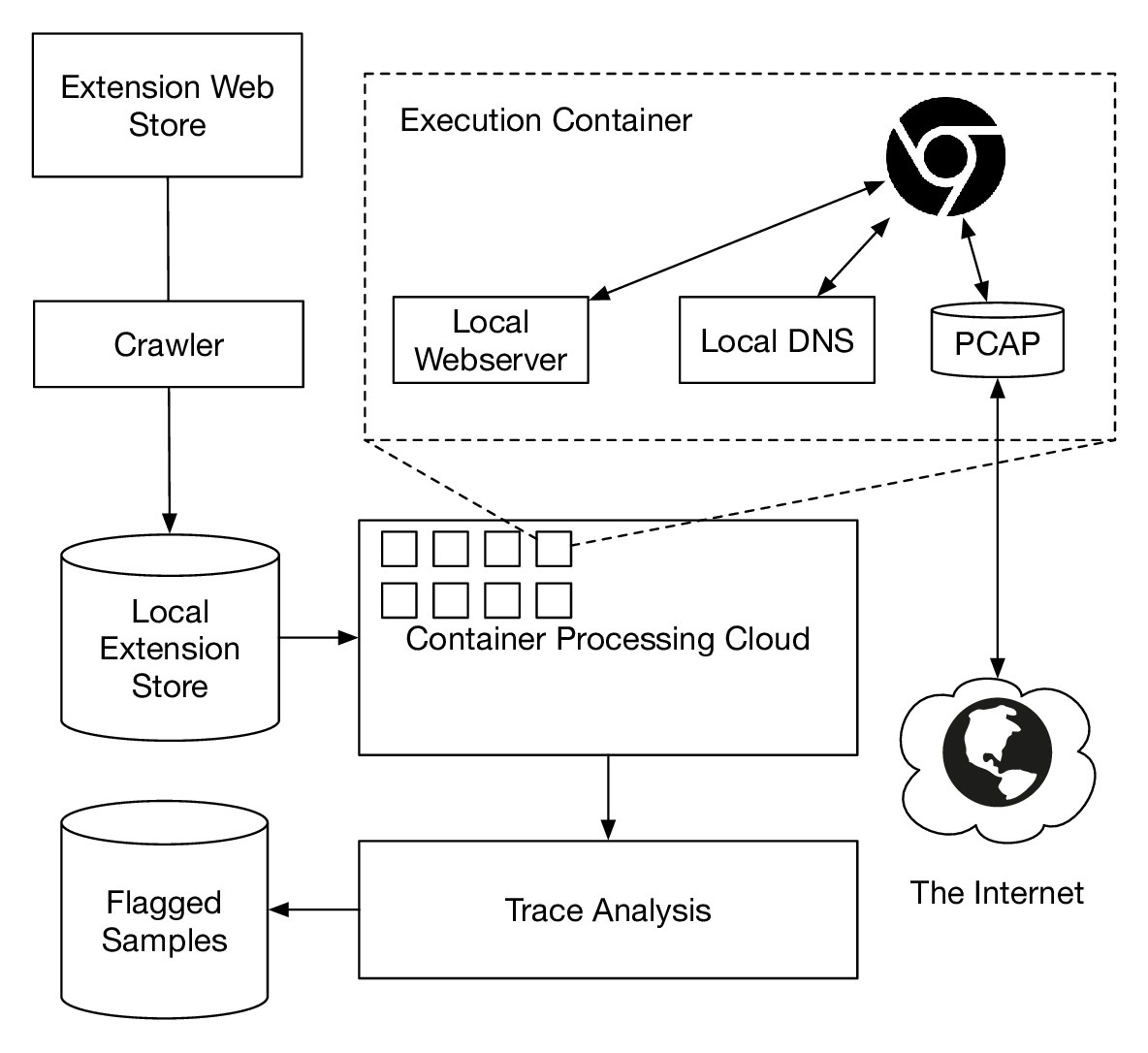 Ex-Ray extension execution overview. After downloading extensions from the Chrome Web Store, we exercise them in containers to collect traces for classification. To support our honeypot experiment we only access Web and DNS locally. As the subdomains we use are unique per extension and we keep the connections local to a container, leaks can be linked to the extension under test.

In total, Ex-Ray flagged 212 Chrome extensions as history-leaking. This included two extensions which were undetectable to prior work. Web of Trust uses strong encryption (RC4) on extension level, before transfering data via HTTPS. Coupon Mate is an extension that leaks browsing history via WebSockets, which is used by 0.96% of extensions that we analyzed. Prior work uses keyword analysis on particular protocols, which would not have triggered on these two extensions.

Our dataset of flagged extensions and a triage report are available in our repository.

The amount of extensions leaking history is troublesome, in particular as this is possible for extensions with only modest permission access. While tracking on websites is prevalent, websites have to opt-in for it and solutions exist that allow users to remove them (e.g., Ghostery). Conversely, tracking in browser extensions covers all visited websites and no opt-out mechanism exists. This behavior does not seem to be monitored for in extension stores.

Our key takeaways from this project are as follows:

We introduce a new method for detection of privacy-violating browser extensions, independently of their protocol, and developed a prototype system: Ex-Ray. Our system uses a combination of supervised and unsupervised methods to identify features characteristic to leaking extensions. We analyzed all extensions from the Chrome Web store with more than 1,000 installations (10,691 total) and flagged 212 extensions as history-leaking. Two extensions that we flagged were leaking history in previously undetectable ways. We suggest that extensions should be both tested more rigorously when admitted to the store, as well as monitored while they execute within browsers. Our paper is available for download here: ( pdf and bib ).